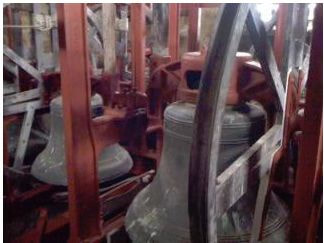 THE LAMBERHURST BELLS
At Lamberhurst Church we have 6 bells, cast for ringing in 1779, the heaviest bell weighing 14 cwt (just under three quarters of a ton). Some towers have as many as 16 bells but most towers would have between 6 and 8 bells. The bells are named according to their position in the ring – ‘second,’ ‘ third’ . . .etc with the first bell or ‘Treble’ being the lightest bell with the highest note and the ‘Tenor’ being the heaviest bell and key note of the ring. When the bells are rung sequentially, down the scale in the simplest pattern, this is called ‘rounds.’ More complicated patterns of ringing, called ‘methods’ always begin and end with ‘rounds.’ ​ 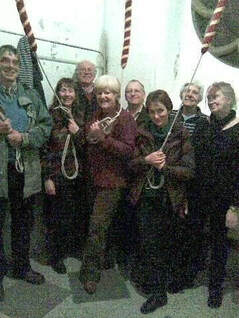 All the bells were originally cast at Whitechapel. The foundry at Whitechapel was started by Robert Mot in 1574 although the succession of the firm can probably be traced back to 1420 when Robert Chamberlain was casting in Aldgate. The No. 3 bell was recast in 1925 by Gillett & Johnston of Croydon. 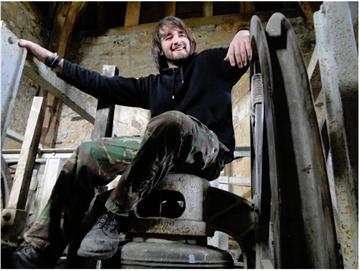 WANT TO BE A BELL RINGER?
The church possesses a fine ring of six bells. Four of them were cast in 1779, one in 1776, and the No. 3 bell was recast in 1925, when all the bells were rehung in a new metal frame.
Ringing is a fascinating pastime and anyone who thinks he or she would like to learn will be very welcome. It is not something which happens overnight. It demands application and practice over a long period of time. First you learn to handle a bell and then to ring with the others. After that comes method ringing. The first methods you learn can be difficult but as you progress the process becomes easier. Having written that, it should be noted that established members of the band who have been ringing for years are still learning! Ringers are part of a very sociable community and there are opportunities for ringing at different towers and making many new acquaintances. If you are interested, here are two contacts for you:
Tower Secretary: John Reid, Apps Farmhouse, Hook Green, Lamberhurst TN3 8LL
Telephone 01892 890672.
Tower Captain: Miss Catherine Heathcote 3, Halls Cottage, Sparrows Green, Wadhurst - 01892 785577.
Practice night is Wednesday from 7.45pm to 9.00pm and service ringing on Sundays is usually from 8.45 for the 9.15 service on the second third and fourth Sundays of the month.